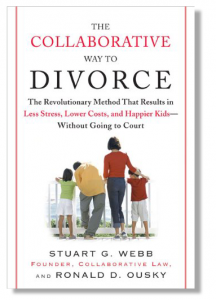 Ron has worked in family law since his graduation from the University of Minnesota Law School in 1982.

Collaborative Practice is a home grown concept; it originated by Stu Webb, a local Minnesota attorney and a tenant of Collaborative Alliance, Inc.

The Collaborative Way to Divorce: The Revolutionary Method That Results in Less Stress, LowerCosts, and Happier Kids–Without Going to Court

In THE COLLABORATIVE WAY TO DIVORCE: The Revolutionary Method that Results in Less Stress, Lower Cost, and Happier Kids—Without Going to Court (Hudson Street Press; June 2006 , $23.95) collaborative law founder and pioneer Stuart G. Webb & Ronald D. Ousky provide a groundbreaking alterative for the millions of couples with children who face divorce each year—couples who want to avoid litigation, but don’t want to give up on getting what they want.

Compassionate, clear, and comprehensive, THE COLLABORATIVE WAY TO DIVORCE is the first trade book to introduce a dignified, highly strategic solution to divorce– the collaborative process, a nationally acclaimed approach that is fast transforming how couples dissolve their marriages, divide their assets, and reinvent their post-divorce relationships, particularly when they share custody of their children. Centered around the understanding that the couple will hire their own individual collaborative attorneys—but all are committed, in writing, to settling their differences out of court–THE COLLABORATIVE WAY TO DIVORCE stresses cooperation over confrontation and resolution over revenge. Most importantly, it keeps children out of the controversy, while protecting their best interests.

For the millions of couples who face divorce each year, The Collaborative Way to mDivorce offers an alternative to court—without giving up getting what you want

Even under the best circumstances, divorce can be marked by a range of painful emotions. But research now reveals that how a couple conducts themselves during a divorce has far greater impact on their children than the act of divorcing itself. Groundbreaking and revolutionary, The Collaborative Way to Divorce is the first guide to the Collaborative process, a nationally acclaimed approach based on the concept that both spouses hire legal representation, yet agree to resolve their differences with no intention of ever going to court.

Stressing cooperation over confrontation and resolution over revenge, Collaborative divorce is fast transforming how couples dissolve their marriages, divide their assets, and reinvent their post-divorce relationships, particularly when they have children. Written by Stu Webb, the founder of the Collaborative law movement and Ron Ousky, an early pioneer of the process, The Collaborative Way to Divorce guides you through the steps of the Collaborative process so that you can make better, more informed, and more strategic decisions—resulting in a win-win outcome for you and your spouse.

“Invented more than a decade ago by Stuart G. Webb, [collaborative divorce] is gaining in popularity around the nation.”— The New York Times

“An increasingly popular process that is often faster, cheaper, and more private than standard courtroom divorces, not to mention less emotionally taxing.”— The Wall Street Journal