Eight guys, all around 60, riding down I-35 in a large van; heading out to Nebraska to watch our Minnesota Gopher football team disappoint us once again. But this blog is not about football and disappointment. It’s about going back and forth in time and about the behavior of men who have shared 40 years together.

I met these guys when I was a teenager. I was out in the world for the first time, trying to forge some friendships at St. Thomas College that might give me some type of gateway to adulthood. I had no way of knowing that I had stumbled into a gold mine.

These early years, and ultimately these friends, left such an imprint that part of me still thinks I am 19; particularly when I am with this group. Indeed, the night before the trip, as I am going out to pick up a van from a suburban man who bravely rents out this treasured vehicle, I notice that I am anxious about whether this man will want to rent his precious van to a bunch of “St. Thomas guys.” Then I remember that he is actually renting his van to a bunch of old men, (at least on the outside). I am reawakened to reality; at least for a while.

The next day we are all driving through Iowa, music and laughter filling the van; just like old times. My friend, Fran, who has been providing the soundtrack for this group since the days of cassette tape players, lulls us back into our college days with music from the 70s’. At one point, Fran plays The Theme from Shaft, a funk and soul 1970’s theme song about a very hip private detective. I am taking it all in when one of friend quips “Yeah, nothing quite says Shaft like eight old white guys driving through Iowa in a van.” I am awakened once again. 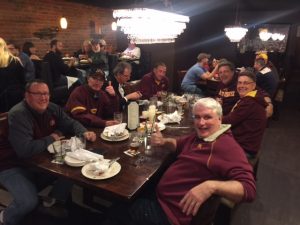 The youthful strut returns a few hours later, as we stride into a bar in downtown Lincoln, brandishing our Golden Gopher sweatshirts and bracing ourselves for some pushback from the local faithful Nebraska fans. Reality sets in again as we are greeted with welcoming smiles. We are not feared or treated as a threat. Maybe (I think) it is because our Golden Gophers, a non-factor in football in our lifetimes, are not a threat. More likely is because the local Nebraskans simply take delight in watching eight old guys who seem to be having so much fun. Whatever it was, my sense of age identity kept fading in out: I am 59, then 19; then 59 again.

As I reflect back one week later, I realize I am quite content to be 59; especially with these guys. The laughter is still there; but our social range has expanded to much more. We have shared our lives together; weddings; births, funerals; laughter and tears; and there is more depth to the relationships. Over the years, we have prided ourselves in staying young at heart and we have somehow found a way to mature enough to really support each other; through everything.

Being 19 was a lot of fun, especially with this group; but part of it felt like an audition. Would these great friends still be with me, when my weaknesses and vulnerability show? Now, through four decades, I am secure in the knowledge that they have seen every wart; and still, they keep showing up. Being 19 was great; but this is my time to be 59; and to be with people who will stand by me; all the way to the finish line.

Ron Ouskyhttps://www.ousky.com/our-collaborative-divorce-team/ron-ousky/
Ron Ousky has worked in family law since his graduation from the University of Minnesota Law School in 1982. Since that time, Ron has become recognized as an international leader in developing innovative ways to help family law clients. He is a recent president of the International Academy of Collaborative Professionals and a cofounder of the Collaborative Alliance Executive Suites. He has been interviewed and quoted in numerous newspaper, radio, and television stories on Collaborative Law, including a feature on the CBS Evening news. Ron has handled thousands of family law cases, including hundreds of cases in each of the following areas: traditional negotiation; mediation; Collaborative Law and litigation.
Previous Post
Ron’s Personal Blog: When Losers Become Winners
Next Post
Good Counsel: Getting Divorce Lawyers and Therapists on the Same Team